A vote for Kyle Steinburg will move this county in a positive direction. 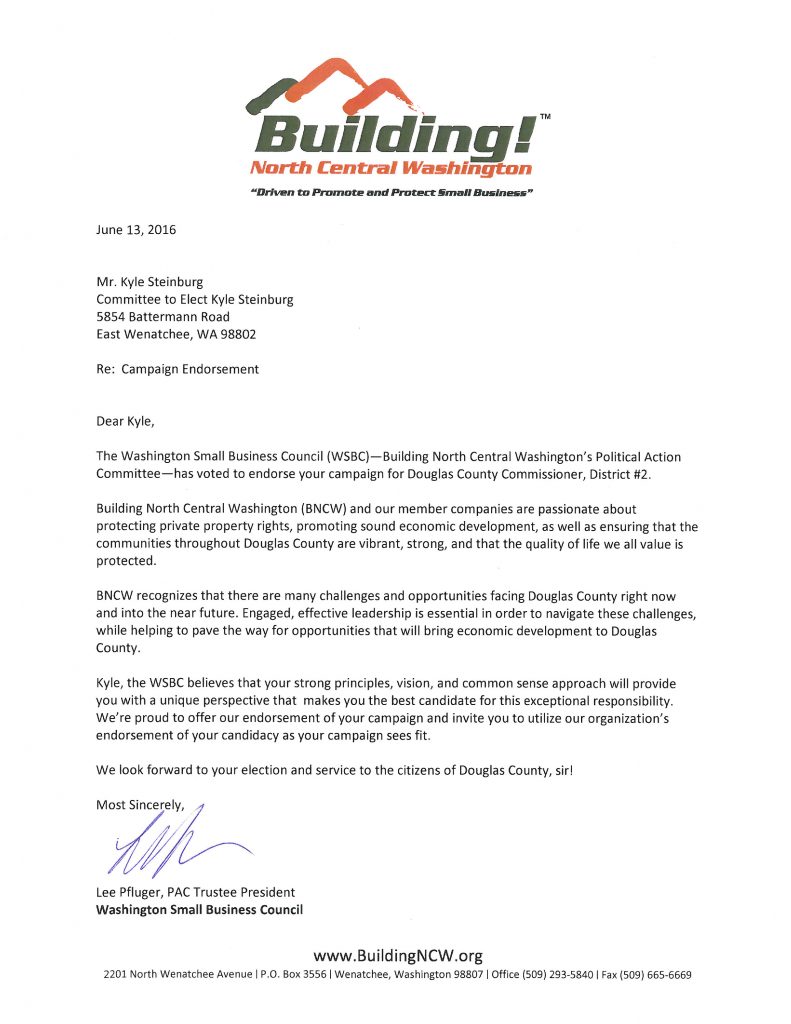 “BNCW looks forward to supporting your campaign however we are able, sir. Thank you, Kyle!”

Read the article over at wethegoverned.com

If you would like to help support our campaign by door belling your neighborhood or even just talking to a few close neighbors please let us know. Douglas County needs new enthusiastic leadership and I am the candidate that fits that bill. Thank you to all those who have been so supportive of our campaign, the outpouring of support is very much appreciated!

It is Time for New Leadership

Dale Snyder, the current commissioner was on KPQ yesterday. When asked about foreseeable problems and challenges Douglas County faces he replied that maintaining the current road system and expanding infrastructure was going to be difficult. Dale mentioned that Douglas County does not have the revenue it did 6 or 7 years ago when the housing market was booming. Not five minutes later in the discussion he mentions how they (Douglas County) embraced growth and there are developments everywhere.

Really, where are all these developments?

Does Dale even realize he contradicted his own statement? If we have all this growth why does he say they don’t have the revenue to maintain roads? Dale Snyder has failed to manage the growth, he has failed to provide affordable housing, and he has failed to establish an environment that will create jobs. It is time for new leadership, leadership with fresh ideas, leadership that is willing to work with its constituents and leadership that creates opportunity and can move Douglas County in a positive direction! If you want that leadership, support and Vote for Kyle Steinburg.

Commitment to the Voters of Douglas County

On April 5, 2016, a man named Glen Morgan posted an article on the website www.wethegoverned.com, a site that “exists to support activists and citizens who are concerned that government is too big, intrusive, abusive, corrupt, and incompetent.” The website states that it believes that government needs to be substantially and significantly reformed in order to restore many of the founding principles and freedoms on which our nation was founded, and that openness, access to public records, and exposing the truth will be a critical component of such reform, even if the truth may be embarrassing for the politicians involved.

The April 5, 2016 article took aim at Douglas County, Washington, and particularly at the Douglas County Commissioners, who failed to file official capital asset reports on an annual basis for the last five years, which appears to be a gross misdemeanor under Washington law.

Mr. Morgan referenced my name in his April 5, 2016 article (or at least I believe he was referring to me, despite the mis-spelling of my name) when he mentioned that I am running against Commissioner Dale Snyder. Mr. Morgan suggested that his readers contact me to see if I understand the importance of inventory management and following the law. The article states that if you like my positions, I “would certainly be better than the incumbent.”

I feel compelled to make this statement in part because of the response that was provided to Mr. Morgan by Douglas County. The Douglas County Prosecuting Attorney’s Office prepared a memorandum in response to Mr. Morgan’s inquiry that declined to prosecute the Douglas County Commissioners for the “alleged violation of RCW 36.32.210(3)”, stating “the complainant appears to have caused this matter to be brought to the attention of the Prosecuting Attorney based upon political motives during an election season. The complainant has published commentary regarding the matter within which the name of declared candidate Kyle Steinburg is referenced as an alternative candidate for the office of Douglas County Commissioner.” The Prosecuting Attorney’s letter concludes by stating “The political process is a more appropriate venue to achieve political goals.”

I want to make it clear that I have never met or spoken with Mr. Morgan, and in no way whatsoever did I solicit the inquiry made by Mr. Morgan or his open-government advocates. I only became aware of this matter when constituents reached out to me because my name was invoked. While I am an ardent advocate for open government, competent management, and accountability for failures, I deny any insinuation that I was responsible for this inquiry in any way.

While I was not involved in starting this matter, I am interested in the outcome, as I am a taxpaying citizen of Douglas County, and I care about how the County is accounting for its capital assets. This statement should clarify for the County Prosecutor that the inquiry was not mine, and does not appear to be political in nature, but rather arose from concerns over the quality of governance.

A quote from Mr. Morgan’s article sums the issue up nicely: “No matter how hard the incumbent Douglas County Commissioners try to prove they are incompetent rather than criminal, the taxpayers of Douglas County will benefit by forcing their elected officials to take inventory stewardship and management seriously for a change.” I commit to the voters of Douglas County that I will diligently account for and manage the assets under my management if I am elected commissioner. Thank you.